I’ve Just Fallen For Someone.

This song was written by John Askew and John Lennon in 1960. It was only credited to John Askew. It was first recorded by Adam Faith in 1961. John Askew recorded his version in 1962 and released it using the name Darren Young. John Askew was also known as Johnny Gentle. Darren Young’s version was released as the B-side to the single My Tears Will Turn To Laughter. The single was released on the Parlophone label. Darren Young was accompanied by the John Barry and Orchestra.

This song was written by John Askew and John Lennon in 1960 but was only credited to John Askew. John Askew was also known as Johnny Gentle. The song was first recorded by Adam Faith in 1961 and released on his self-tilted album. It was also released on the 1962 EP Adam Faith. The album also included versions of Watch Your Step, It’s All Over Now, If I Had A Hammer (If I Had A Dollar), and I’m Gonna Love You Too. I’ve Just Fallen For Someone has also been recorded by John Askew using the name Darren Young.

Johnny Gentle wrote and recorded this song in 1959. It was released as his début single on Philips Records. The B-side was another self-penned song, Boys And Girls (Were Meant For Each Other). The single failed to chart. His second single, Milk From The Coconut , and first EP, The Gentle Touch, also failed to chart. Johnny Gentle was born John Askew in Liverpool in 1936. He recorded under the name Darren Young in 1962 before joining The Viscounts in 1964. He was backed by The Beatles in 1960 during his tour of Scotland and co-wrote the song I’ve Just Fallen For Someone with John Lennon.

Paul Anka wrote this song in 1958 and it was first recorded by Buddy Holly. It was released in 1959 as the B-side to Raining In My Heart. The single reached number one in the UK. It was the first posthumous number one in UK chart history. The song was covered by Freddie and The Dreamers in 1964. Their version was released on the album You Were Made For Me. The song was part of Johnny Gentle’s repertoire during his 1960 tour of Scotland. The Beatles were his backing band during the tour. Paul McCartney didn’t like the song. He later said he thought the strings were “a bit soppy”. 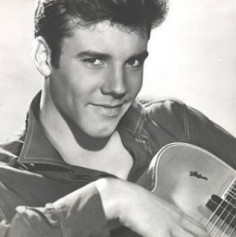 This song was written by Doc Pomus and Mort Shuman in 1959. It was first recorded by Dion and The Belmonts. Their version reached number five on the Billboard chart. The song has been covered by Craig Douglas, Bob Marley and The Wailers and Helen Shapiro. English singer Marty Wilde recorded the song in 1959 and his version reached number two in the UK singles chart. The B-side was Danny. The song was part of Johnny Gentle’s repertoire during his 1960 tour of Scotland. The Beatles were Johnny Gentle’s backing group during the tour.

This song was written by Sid Wayne and Bix Reichner in 1958. It wa first recorded by Elvis Presley in 1958 and was released in 1959. It was released as a double A-side with A Fool Such As I. The single reached number four on the Billboard chart and number one on the UK singles chart. The song was part of Johnny Gentle’s repertoire during his 1960 tour of Scotland. Johnny Gentle was backed by The Beatles during the tour. 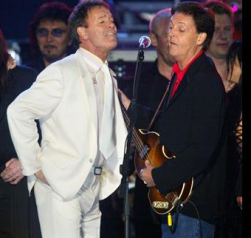 Lionel Bart wrote this song in 1959 and it was first recorded by Cliff Richard and The Drifters. They released it as a single with Apron Strings on the B-side. It was their fifth single and their first number one in the UK. It was also their first single to chart in the US, reaching number thirty. John Lennon liked this song. Paul McCartney once said it was “one of Cliff Richard’s best ones”. Cliff Richard and Hank Marvin (of The Drifters (later The Shadows)) recorded a new version of the song in 1986 with comedy group The Young Ones. That version was also a UK number one. Johnny Gentle played the song during his 1960 tour of Scotland. The Beatles were his backing band for the tour.

Songs We Were Singing
Blog at WordPress.com.