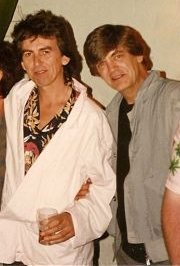 This French song was written as Je t’appartiens by Gilbert Becaud with lyrics by Pierre Delanoe. It was first recorded by Gilbert Becaud. English lyrics were written by Mann Curtis in 1957 and that version was first recorded by Jill Corey as Let It Be Me. The Everly Brothers recorded the song in 1960 and released it as a single with Sine You Broke My Heart on the B-side. The song has been covered by Chet Atkins, Andy Williams, Brenda Lee, Sonny & Cher and Bob Dylan among others.

Let It Be Me was part of Rory Storm and The Hurricanes’ repertoire and was sung by Lu Walters. Merseybeat group The Escorts covered the song in 1966 and released it as a single with Mad Mad World on the B-side. A live version recorded by them at The Blue Angel was released in 1982 on the album From The Blue Angel. George Harrison saw The Everly Brothers live in September 1983 and after recorded a demo of this song. It was later released on the 2012 album Early Takes: Volume 1. He also played the song on Radio Rockline in 1988.