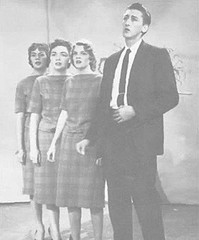 Thomas Wayne and the DeLons.

This song was written by Gerald H. Nelson and Fred B. Burch. It was recorded by Thomas Wayne and The DeLons in 1959. It was released as a single with Saturday Date on the B-side. It reached number five on the Billboard chart. The song has been covered by The Fleetwoods and Brian Hyland. Paul McCartney and Wings recorded a version of the song during the Red Rose Speedway sessions in 1972. Their version has never been released.